What is it that can protect your files, even if your hard drive fails? That can serve up media files like the way Netflix does with trailers and covers? That can run a personal cloud far away from companies like Apple, Google, and Microsoft?

A NAS of course. A NAS is a Network Attached Storage and with it, you can do all the above and more. In this post, I will cover what a NAS is and what you can do with a NAS. Also, do not miss amazing software that you can install with a simple click or the cheap solution if you just want to share files in your network. Let’s dig in!

What is a NAS (Network Attached Storage)?

NAS stands for Network Attached Storage. You might be surprised by this based on the name, but it’s storage that is attached to your network (a shocker, I know). You can sit at one computer, place some files on the NAS and then access it from another device in your network without having to manually copy the file to a USB and do it that way.

You might have something similar at work, where you have network drives that you can access. With a NAS, it’s the same thing, with the exception that you don’t have to serve hundreds of employees.

Two NAS can look very different from each other but the essential thing is hard drives. Some NAS, like this monstrosity Synology DS918+ on Amazon. It can hold 4 hard drives originally and it’s also possible to expand it further if needed. This is not something that most people will have at home, but more like video creators. But it’s cool that it exists. 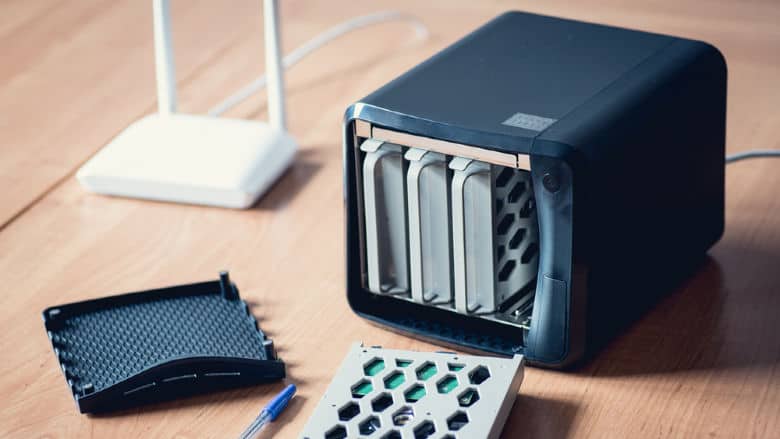 Having a NAS is often very useful for archives and storing files for a longer time. On your computer, you want the files that you are working with at the moment and then, when you are done, they can be archived to the storage on the NAS.

I have it set up like that. I run this website as well as two others with some friends, and when I have written a post, I put it on the archive on my NAS. I do this for all my projects and it’s nice having just my most important files on my laptop so that I have them whenever I go somewhere.

What Can You Do with a NAS?

To be fair, there’s only your imagination that is stopping you from what you can do with a NAS. The no-brainer here is the storage of course. You can have a network share that you can reach from multiple computers in your household. This is very useful when sharing documents or photos with the rest of the family.

Backing Up Your Devices

Another thing you can do with a NAS is to take regular backups of your devices so that you always have your files saved somewhere if the worst would happen. I don’t know how many times friends and family has called me in the panic with all their images gone because the hard drive failed. Of course, they don’t have any backup, as technology always works, right?

To make it easier, many NAS systems offer a backup software that handles all the things, you just set it up and configure it once. It can usually be configured to run during the night so that you don’t notice it, which is the best kind of backup, I think. The one that is always there if needed but not noticeable.

A cool thing that you can do with a NAS, is to run a software called Plex (usually installed by default or in the App Store for the manufacturer). This software will read movies, tv shows, music, and other media from a folder and will then present it to you on your computer, tv or another device.

But it won’t just list the files. Plex will create a Netflix-like library, downloading movie trailers, album covers, and extra material. It is also possible to connect your tv subscription to Plex so that you watch TV from the app. Plex collects all your entertainment into one app and it is running from your network so that you reach it on all your devices.

Running Your Own Cloud Storage

I guess you know about Google Cloud, iCloud from Apple or OneDrive from Microsoft? If you don’t want to use their services because you want to keep your data to yourself, you can use a NAS to create your personal cloud storage that you can access from outside your home.

You take an image on your phone and that photo is automatically synced to a library on your NAS so that when you come home, you can quickly see that photo on your computer. That could be one use case for a personal cloud storage. The same could be said with documents or anything else.

If you are a bit more tech-savvy and would like to have a personal lab environment at home, you can have a NAS doing the hard work. Many NAS systems offer the possibility to create virtual machines, making it quite easy to set up a domain controller and a web server, for example.

If you want to do this, you should be ready to add some extra RAM in your NAS as virtual machines usually want at least 4GB ram each. Most NAS hardware comes with a 2 or 4GB ram which isn’t enough.

Options When Choosing a NAS

If you have decided that a NAS is a good move and you would like to get one yourself, you should choose the option that fits you and your economy the best. Maybe you are just looking to sharing some files to other devices? Maybe you would like to have personal cloud storage? Maybe you have some spare parts from an old computer that you want to use for a NAS. All the options are available.

A NAS System from Known Manufacturers

The easiest option, though a bit more expensive, is to just purchase a NAS. There are hundreds of NAS systems on the market from different manufacturers, both good and bad. However, the only two manufacturers that I would highly recommend is Synology and QNAP. They are both big, working a lot with NAS systems and have come very far in the software that they provide.

Both Synology and QNAP are easy to set up and their software is easy to use, even for people who are not very tech-savvy. It’s built on the foundation of apps, so you have an App store where you download apps that gives you more features and functionality. Both manufacturers also offer good support for their hardware.

Using an External Hard drive Plugged into a Router

If you are just looking to share storage with others in your network, getting an external hard drive, like this Toshiba 1TB hard drive from Amazon, to your router’s USB could be a good idea. Most routers with USB will offer some form of network storage in their software. What you do is simply connect the external drive and then configure the router to use it as a storage option. It’s important that the router and the external hard drive supports USB 3.0 for faster speeds.

Using an Old Computer with FreeNAS

A third option would be to take an old computer that you have at home and install a software called FreeNAS. This software can do most, if not all and more, things that a NAS from Synology or QNAP can but it’s free. The caveat here is that it’s not as easy to use and I would not recommend this system to anyone that doesn’t understand computers and IT.

Why I Recommend the Synology SD218+

As I said earlier, I only recommend getting a NAS from either Synology or QNAP because that is the manufacturers that I believe the most in. But if you asked me what NAS I would recommend at the time of writing this article, the Synology DS218+ on Amazon is my choice, and here’s why.

I recently got the question from a friend, which NAS she would get. She is not very tech-savvy and just wants it to work. The reason why she wanted a NAS was that her laptop crashed a few months ago and she did not have any backup. To solve this, she asked for a solution.

I find the software from Synology easier to use than the QNAP software. QNAP, on the other hand, often has better hardware for the price. It’s something you will have to choose between, software or hardware. For beginners, Synology is the better choice. For more advanced users, QNAP is a good choice. 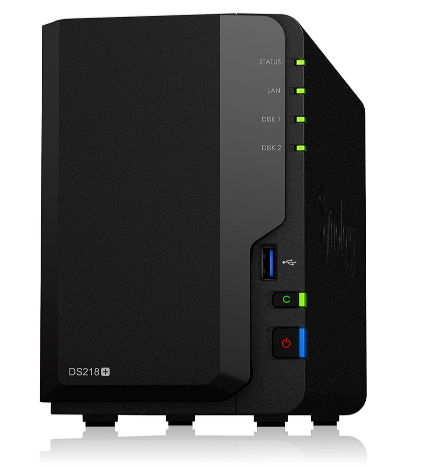 The DS218+ is cheaper NAS that still offer a lot of performance. There is a cheaper version called DS218play but there is one reason why the DS218+ is better and that is hardware. The + model has 2GB of ram while the play-version only has 1GB. Sure, 1GB might be enough for most things but having that extra hardware for not so much more is always better.

However, the CPU is also different and here is the big change. The play-version has an ARM-processor while the plus-model has an Intel. This opens a lot more possibilities on what you can do with your NAS. For example, installing Plex on a DS208play isn’t possible because Plex doesn’t support ARM-based processors.

This is also true for virtual machines, as any operating system is running better on an Intel-processor than one that is ARM-based.

So, it’s for the much better hardware while still a good price that I would recommend the DS218+. Any NAS will perform well for you but if you are simply looking to get up and running with your first NAS without being limited to what you can do, I highly recommend the Synology DS218+ as well as two WD Red 2TB disks from Amazon. WD Red is a series of hard drives that are made for NAS systems and offers the best performance running 24/7.

Should You Get a NAS?

Yes, you should get a NAS. Yeah, I guess that you weren’t surprised by the answer, but if you don’t have a NAS, you should get something else that lets you back up all your files so that you have them if the worst would happen, that is the most important thing.

I would say that it comes down to security, privacy, and flexibility. How much do you care about securing your files? How much do you value your privacy? How great would you think it would be to have your files on the go? That is up to you, but I know what I would choose, any day of the week.